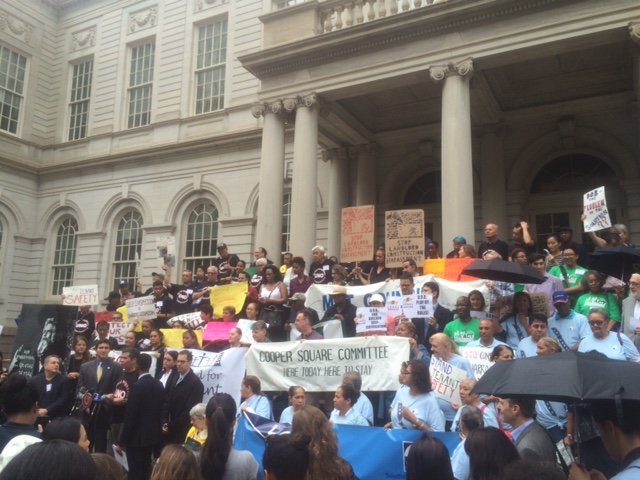 New York - A new report by the Stand for Tenant Safety coalition was released today on the steps of city hall. The report, which is based on surveys of 150 rent stabilized tenants and the Department of Buildings’ (DOB) records of 57 buildings where survey respondents live, documents aggressive construction practices in occupied buildings and the ways in which construction is used to displace rent-regulated New York City tenants. Stand for Tenant Safety (STS) is a coalition of community-based organizations, legal service agencies and tenant advocates who are working to document instances of “construction as harassment” and protect tenants.

The report details some staggering findings:

“This research confirms and documents what we’ve been hearing repeatedly from rent stabilized tenants across New York City--major construction is severely impacting tenant’s health, safety and well-being and is being used to displace long-time community members,” said Alexa Kasdan, Director of Research and Policy at the Community Development Project at the Urban Justice Center.

The 12 bill legislative package that was introduced today includes the following (see report for more information and additional bills):

"Having lived through two years of reckless construction with rarely an effective response from DOB to get it under control, I can say that beyond those many, long days of dangerous, unhealthy, and stressful conditions, the result has led to 1 bedroom apartments rented out as 2 bedrooms, at an inflated cost to new tenants, and potentially unsafe conditions for everyone, including firefighters and other first responders," said Shawn Dahl, resident of the East Village in Manhattan.

“Far too many bad landlords are getting away with knowingly providing the city Department of Buildings with false information through self-certification. This process, which allows the landlord to hire his own engineer and architect to rubber stamp inspections for work permits, is often the first step in the process to harass tenants through construction. I look forward to working with my Council colleagues, city officials, and community advocates to pass this comprehensive legislative package and stop tenant harassment before it has the chance to begin,” said Council Member Margaret Chin.

“Since I’ve taken office, landlords using construction as a means to displace tenants has become an increasingly pervasive problem in my district.  My bills in this package seek to raise fines for building owners who do construction work without a permit or in violation of a stop-work order, and to require additional oversight for contractors who do this illegal work. Fines need to be more than just the cost of doing business, and contractors need to face consequences for breaking the law. The DOB must do more to protect tenants from unscrupulous landlords, and to protect tenants’ rights and quality-of-life,” said Council Member Antonio Reynoso.

"The Stand for Tenant Safety (STS) coalition of 22 community organizations and 12 council members came together to develop ideas and implement solutions designed to improve the lives and safety of millions of New York City tenants," said Council Member Ben Kallos. "Every day, my office receives calls and emails about construction in and around buildings, harassment of tenants, or building repairs that have been ignored. This comprehensive legislative reform package will provide critical and overdue transparency over the Department of Buildings, improve the department's enforcement mechanisms, and curtail the actions of bad landlords."

“Tenants should not be put at risk by landlords who use building construction as a means to harass and to drive tenants out of their buildings. And the denial of basic amenities coupled with loud noise and toxic fumes from constant construction is an unacceptable, yet all too familiar tactic designed to drive rent-stabilized tenants out of their apartments. That’s why I’m proud to sponsor legislation in this robust package of bills that will strengthen tenant protections and make information about the maintenance of key services during construction publicly available. For the safety and health of all New Yorkers, and to protect the affordable housing we have now, it is time we make meaningful reforms at the Department of Buildings that will hold bad acting landlords accountable,” said Council Member Mark Levine.

"Too often landlords get away with claiming their building has no occupants and forcing tenants to live amidst a gut renovation. Tenants in my district have experienced dangerous conditions, including the removal of an exterior wall, the only stairwell in the building, or a fire escape. Until DOB finds a solution to check every landlord's claims of 'no occupancy,' it remains complicit in the harassment that landlords inflict on tenants. My and Council Member Corey Johnson's bill will require DOB to post a permit's occupancy status on the DOB website and on the work permit itself, so tenants can quickly identify any false claims and use this newly available information to pursue a stop work order and proper tenant protections. I am hopeful this greater transparency will keep landlords accountable and tenants safe in their homes," said Council Member Helen Rosenthal.

"I am proud to stand with the STS Coalition and my Council colleagues.  For far too long some of the city’s worst property owners have used devious, despicable tactics, as well as construction renovations to harass and intimidate tenants.  As you will see from the survey’s results, the end result of lax oversight by the Department of Buildings (DOB) is the harassment of thousands of New Yorkers annually.  If DOB wants to right a wrong, then the agency must stand with us to initiate reforms that will ensure that construction is safe with tenants in residency and that tenants get the help they need.  The intent of this legislative package is to make New York City the best and safest place to live, work, and play.  I believe that is something worth working for,” said Councilwoman Rosie Mendez.

ABOUT THE COMMUNITY DEVELOPMENT PROJECT AT THE URBAN JUSTICE CENTER

The Community Development Project (CDP) at the Urban Justice Center strengthens the impact of grassroots organizations in New York City’s low-income and other excluded communities. CDP partners with community organizations to win legal cases, publish community-driven research reports, assist with the formation of new organizations and cooperatives, and provide technical assistance in support of their work towards social justice.

ABOUT STAND FOR TENANT SAFETY

Stand for Tenant Safety (STS) is a citywide coalition of community organizations who are fighting to protect the lives and homes of New York City tenants where landlords are using construction as harassment.  Through this community driven effort, we demand the systemic reform of the Department of Buildings.